I met Ed Sheeran! And gave him my book! 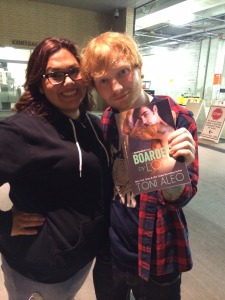 So as a lot of you know, I met Ed Sheeran last night after his concert. I wanted to share how this happened and how much the moment meant to me.

Before me and my best friend, Stacey, even got to the arena for the concert, we went to the mall and joked about stalking him after the concert. I wanted to believe I was going to get Boarded by Love to him but it was going to take a miracle. I had contacted God and everyone and the only answer I ever got was, give me the book and I’ll give it to him. I didnt want that, I wanted to give it to him, I wanted to thank him and tell him how much his music meant to me. So I decided to wait, see if I could get the chance. At the mall, I bought some purple poppin lipstick and I was convinced it was on and popping! Good things were in store.

We went to dinner and then headed to the arena. It is cold right now in TN so the tanks tops were impractical but EVERYONE loved them. We were stopped for pictures, people told us how amazing they were, it was awesome. So then we get to our seats and we are so close that I swear we are going to be able to see this guy sweat. I was so happy and I was pretty sure I could throw the book on stage or even jump over the curtain to get to him, but I figured I’d wait. Hopefully afterwards I can get to him.

So the concert was freaking amazing. I have NEVER been to a show that is so phenomenal. It was Ed and his guitars. It was amazing; the way he built each song until it came together into a masterpiece was awe inspiring. When I wasn’t singing, it was because I was in complete awe. It was a sight to behold and I feel in love with him even more. If you ever get the chance to go to his concert. Go. It was amazing. I was good just with that. Seeing him live is a blessing. 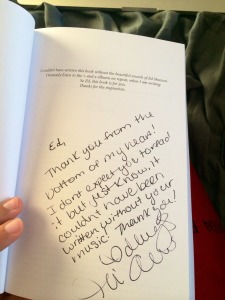 I made friends with the girl sitting next to me and we came up with the best plan to find him, which was to go to the side back entrance. Well, God and everyone had that plan. I shit you not when I say there was over thousand people waiting for Ed to come out. It was insane and my spirits dropped some more but I felt it in my heart that this was going to happen. So I found a door, and I sat next to it, and someone came out and told us that he is doing a private show till 4am and that he isn’t coming out here. I was like crapola, where? Well she wouldn’t tell me but thankfully the girl I was with got it out of her while me and Stacey cooked up our next plan. When the girl came back to told me that he was coming out of ramp by the parking lot I was at, to his bus. She had to go so we thanked her and high tailed it over there. Still girls were everywhere waiting for Ed and I wasn’t sure if this was going to happen. Afterward, Stacey told me she was convinced it wasn’t and she was going to be comforting me all the way home. 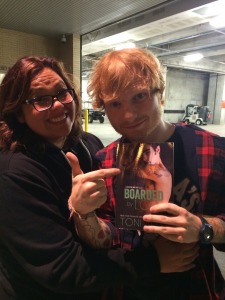 Come midnight, I decided to investigate. So I went in the ramp, but I didn’t see the bus and that made me think he wasn’t coming out there. So I started to freak out, I felt like my chances of getting my book to him was falling through my fingers. So then I saw a huge black guy that looked like a bodyguard. I pulled Stacey out the car and we went to investigate him. Unfortunately, he didn’t know anything, and probably thought we were insane. I asked Stacey if she thought we should go to the place where all the girls were standing to find out stuff, and she agreed so we went over there and everyone really didn’t know anything, they were saying different stuff, that I knew wasn’t true. So I stood there, watching for a moment and then the stage crew started coming out.

I locked eyes with one of them and knew he had the info I needed. So I followed him. I explained that I needed to get my book to him because I dedicated it to him. He looked through the book and didn’t believe me at first, wanting my ID but I didn’t have it, it was in the car so I pulled up my Facebook page and that worked and he told me that it wasn’t that ramp, that it was the one behind the other building and that he wasn’t going to be there till around 4am. I was like party. So I went back and got Stacey, got in my car and drove to where he told me too.

But the place was full of girls.

Sprits were gone by this time but still I was like lets see what going on. We got out and people started to leave because someone had stopped and said he left. We found three other girls for I have no reason, but I was drawn to them and I asked them what they knew. They didn’t know much, only that Ed hadn’t passed and no one had seen him yet. We were talking and everyone was all upset because it looked like he had already left but I had two people that work in the damn arena tell me that he was still there so I wasn’t leaving. Well then this girl comes up and says that its on Twitter that he is at a bar. That CLEARED everyone out except for me, Stacey and these three amazing girls. At this point, I feel dumb because not only am I freezing but I grasping at straws. Do I go to the bar or do I wait?

Well, someone stopped and said he left, I was like, he didn’t leave. I know he didn’t. I’m going to wait, well everyone decided to wait too. I felt it in my heart and so did this sweet girl. So we waited. THANK GOD.

I swear not even twenty minutes later a huge white Ford something pulled up on the ramp and I swore I saw ED in the back of the truck and then he hops out the car like its no big deal that Ed fucking Sheeran is hopping out a truck.

At this point, I am bawling my eyes and hyperventilating.

Stacey takes off because I can’t move or breath and bear hugs him and then drags him to me, ignoring everyone else. She’s like “She wrote a book about you!” and I’m like NOOO!, I dedicated it to you and I swear you guys, he was amazing. It was like he was my best friend and we were talking with no cares in the world. He kissed me over and over again, hugged me so tightly and told me that I was an inspiration and that he was honored to have the book dedicated. He read “New York Times and USA Today bestselling author, Toni Aleo” over and over again, he’s like do you see this? Don’t brush this under a rug, this is amazing, you are amazing. I am crying so bad it’s not even funny so then he is like lets breath together and I swear it was mind blowing. I thank him, told him he was my inspiration and that I couldn’t write without his music. He was so honored and so genuine about it. After taking pictures with me and loving on me some more, he said hi, took pictures and treated everyone like they were his friends. He was so genuine, so sweet and funny! He had a heart of gold! The one girl I was with had lost her leg and he signed it with ‘When your legs don’t work like they used to before’ and then his name as her tattoo on her artificial leg. It was beautiful. Again, bawling my eyes out.

After all that and making all of us feel so damn special, he pulled me into his arms again and told me “Don’t you ever stop writing. Even if it sucks, you get it out of you and you write. This is your dream. Live it.” I will NEVER forget those words. He signed his name on my arm and then kissed me again before hugging me tightly. I was in completely aw. Like I didn’t know what to say or do, I couldn’t believe it. He said bye to us and then he was gone and it was magical. Perfect.

I told Stacey that it was insane how everything we did lead to that moment. How people were so open to help me make my dream to come true. Y’all included. He never saw the tweets but he said he would look for them and that he would look for mine because I told him I would tweet him my pictures and then when I get my tattoo done. The whole day and night was magical and led to having my favorite singer, who inspires me and for him to give me the ultimate gift. Inspiration. How do you ever stop something when your favorite singer tells you not to? I didn’t think I ever would before but now I know I won’t. Not only did I get that gift from him, also timeless memories that I will never ever forget, but also I was able to give my book to him, and thank him from the bottom of my heart. It was beyond magical.