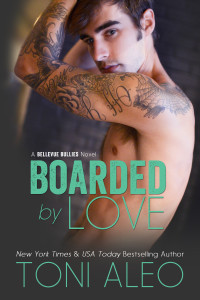 EKK! Chapter 1 is here!!
Can you believe it? we are only 24 days out till Boarded by Love is out! Claire is back in the amazing spin off of the Assassins Series! You will not only see Claire, you’ll hear from Phillip and Reese, and of course the rest of the Assasssin’s clan! So get ready! And make sure to preorder it now on Amazon! Preorders for the other outlets will be available soon! It will only be 2.99 till 9/8 and then the price will go up to 3.99! So save a dollar now while you can!!!! Also, thank you for being apart of my newsletter! It means the world to me and I will continue to do special perks like this, just for y’all! Thank you!

And now, the first chapter of Boarded by Love. I hope you enjoy it! 🙂

Thats it! Hope you liked it!!!
Have a great day!
Love,
Toni Aleo